Real non-hybrid sweetcorn is now incredibly rare. But the hybrids - where every seed sold worldwide is identical - are only good if you can put in all the fertilisers, chemicals and sprays to provide a standardised and identical environment in every field.

We want real corn where all the seeds are slightly different and so can do well in different soils, climates and variable weather, without having to trash the environment into some standardised euro-field of sterile soil and chemical fertilisers.

So, we look for varieties of real open-pollinated corn that are particularly widely adapted and should perform well all over the country.

'Double Standard' Bicolour Sweetcorn - EARLY
This is an excellent real variety of sweetcorn - proper open-pollinated seed, not hybrid - so it is widely adapted, and adaptable to future change in climate or soil, and it hasn't been bred to need lots of fertiliser and sprays.

It is a modern variety, with both white and yellow kernels on each sweet cob.

We're very pleased with it as it seems quite diverse, with a good genetic base, so it should do well on different soils and conditions. Not only are the dual coloured cobs pretty, they also taste really good.

Pretty early - we generally have some to eat by mid August.

Early and tasty, it does well everywhere but particularly recommended for those in colder, more marginal areas of the UK.

Special Swiss Sweetcorn SWEET & TASTY
We’re delighted to be able to offer this variety, which is not only the first new open-pollinated corn to be bred in Europe in modern times, but even a supersweet variety at that!

We had an advance trial of this in 2012 before it had a name, and were really impressed, so we offered it as 'Special Swiss'. Since then it has been renamed 'Damaun' by the breeders, but we're keeping on with our listing to avoid confusion.

Really good, with great feedback. The cob illustrated was grown in our fields in Wales in the terrible 'summer' of 2012, the wettest year on record.

Double Red Sweetcorn INCREDIBLE COLOUR
We've finally found a red corn that is early enough for the UK - while there are quite a few red corns, until now none of them have been early enough to ripen in our short summers. But finally we have found an early red-and-white bicolour corn for you!

This corn has brilliantly coloured kernels in red with a white background. It did exceptionally well in our trials, just as early as the Double Standard. And the plants are an amazing purple colour too, it looks incredible in the veg plot.

A delicious early sweet corn that was bred by Alan Kapuler of Peace Seeds and now brought into production by our friends at the A P Whaley Seed Company. 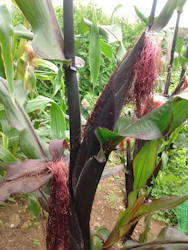 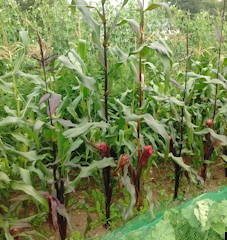 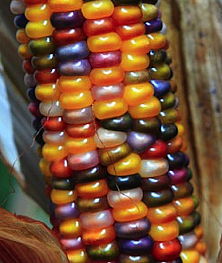 Glass Gem Popcorn
A multicoloured flint corn for flour or popping, this is the prettiest corn we have ever grown.

The colour is just incredible with a whole mix of shiny kernels on each ear. Bred by Carl Barnes from traditional Cherokee corns.

Note that it doesn't really work as a sweetcorn, as it goes hard when ripe - but it is still worth it for the colours.

Should be ready only slightly later than our others. Please email to let us know how it does for you.