It's well worth downloading the full briefing from the link at the top of the page.

The UK Government has launched a Consultation on the Regulation of Genetic Technologies. They are proposing to remove all regulations around plants and animals created using new experimental genetic engineering technologies (commonly referred to as gene-edited or genome edited).

This is not a neutral consultation. It starts with a description of CRISPR and other new techniques as "gene edited (GE) organisms possessing genetic changes which could have been introduced by traditional breeding" but these are new technologies and more is being learnt about them every day. Direct intervention at the genetic level is different from traditional breeding and can result in multiple and unexpected errors across the genome, some of which may pose a threat to people or the environment.

We believe that complete deregulation is a bad idea, and that it is important to have consultations and discussion on a case by case basis before these organisms are released into our environment, rather than waiting to see afterwards if there are any problems.

More generally, we don't believe that the problems in our food system will be solved by a techno-fix such as gene-editing. The supply of seeds is already far too concentrated in the hands of a very few large agri-businesses. We need a broader discussion of how to make our seed and food system work better not gung-ho deregulation.

The DEFRA consultation has now closed, but we would encourage everyone who is concerned about this to write to their MP asking them to keep these essential protections in place.

Ben was talking to someone at DEFRA, and they happened to mention in passing:
'you know, we had a big presentation from the industry, and really,
GM crops will have to be allowed in if we're to feed everyone,
its the only way to solve the food crisis'

Now, this is complete and utter rubbish. It is a line that has been put forward by the GM public relations people in the newspapers as well. The reality is that these faceless corporations have sunk billions and billions of borrowed dollars developing these things, and whether they work or not, they are desperate to get some profit from them any way they can.

So they are lobbying the government to allow them to sell GM seed in the UK, using whatever the latest worry is. (Ten years it was the need for higher vitamins in rice, then making cheap drugs from corn, now a 'food crisis'. )

Once we plant GM crops there's no going back - the genes will escape into wild plants and other food crops. We must all resist this cynical sales push.

Interestingly, Genetically modified crops are the agricultural equivalent of what has been going on with the banks.
The parallels are striking:

And this briefing to the government is simply not true.
Forgetting all the arguments about toxicity and genetic pollution for the moment, concentrate on this simple fact:

GM crops will have LOWER yields than natural plants. 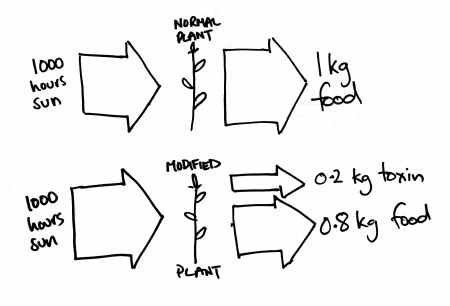 GM Crops will have Lower Yields

It's pretty obvious, looking at this diagram:

Here's a plant , making food from sunlight, as it ought to. It sits there, soaking up sunlight all summer, making grain or corn or whatever.

Now take that plant, and turn it into BT Corn, which 'makes it's own insecticide'. The modification puts in a poison gene from a bacteria. It is locked 'on', so that every bit of the plant has to use some of its energy making a toxic compound.

You can see that you are putting the same energy in, but of course some of that is diverted into making the toxin.

And they don't care if they poison us & destroy the eco-system (all that toxin might not be so great, you know) in the process.

GM crops pose a huge risk to the food chain.

GM foods have not been safety-tested, and should be resisted at all costs.

note : Ben studied genetic engineering at the Department of Plant Sciences in Cambridge.

The security of the worlds food supply is at stake here,
at risk to the same sort of short-term, ignorant, greedy fools who wrecked the banking system.