If you're a beginner gardener, sometimes it can be hard to recognise your baby seedlings when they start to pop up. This page has photos of seedlings by family, to help you recognise what is coming up in your garden or seed trays. It's not a substitute for good labelling! But it may be useful if you're unsure or if things get mixed up.

I've also included the latin names of most of the plants below - these are helpful to know both if you want to save seeds (plants will cross only with other plants of the same species) and also to give you an idea what to look out for when seedlings start to emerge if it's something you've not grown before (related plants often have similar looking seedlings). Spring 2022: This page is a work in progress - we'll add more seedlings as we get good photos of them.

The most common vegetable families

The cabbage tribe - seedlings of cabbages, cauliflowers, broccoli, brussels sprouts, kohlrabi and calabrese all have identical seedling leaves, as they're all the same species (Brassica oleraceae), just selected for different characteristics. 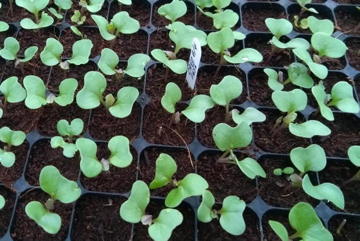 Turnips, mizuna, mibuna and the other oriental brassicas - some of these are Brassica rapa, others (the mustards) Brassica juncea. But the seedlings are very similar to the cabbage family ones above, just a little smaller and a somewhat brighter green colour. 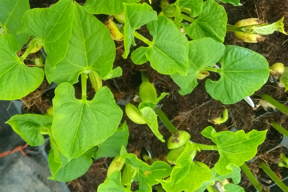 Runner beans (Phaseolus coccineus) keep their seed leaves below the ground, so you don't see them - it's an easy way to tell the difference between them when they're tiny. (Picture to follow!) 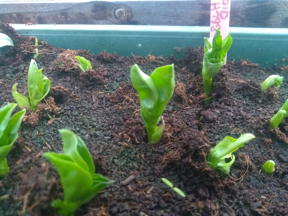 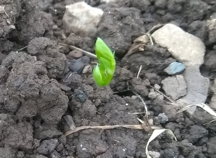 Moving on to some of the more unusual beans, if you're trying out the Tepary beans (Phaseolus acutifolius) they are similar to french beans, but with pointier leaves. 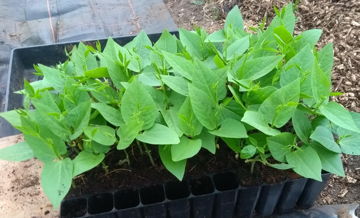 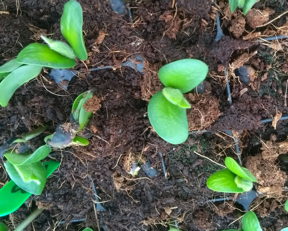 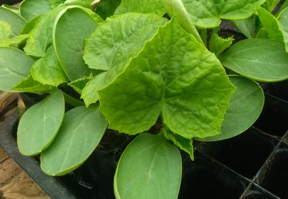 Melons (Cucumis melo) look really similar - here they are with just their seedling leaves. NB - they won't cross with cucumbers (note the different latin family name) even though they look so much the same! 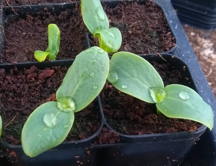 You can easily see from their seedling leaves that the Achocha (Cyclanthera pedata) are from the cucurbit family, even though they're a different species and the fruits look quite different 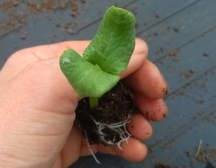 Peppers and chillies are pretty much all from the same family (Capsicum annuum). This means that if you're wanting to save seed for next year then you need to grow chillies & sweet peppers separately. It also means that the seedlings - and indeed the baby plants - are identical, so make sure to label your trays well! Here's a baby pepper just starting to unfold, and then another with the seedling leaves well developed, and it's first set of true leaves: 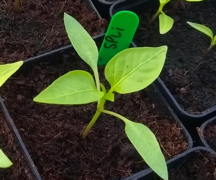 Tomatoes (Solanum lycopersicum) have quite variable leaves by species. The photo below shows the seedling leaves fully grown, and the first set of true leaves opened up on a baby Amish Paste. Potato leaved varieties like Galina have much less 'cut' leaves, but they still have the same seedling leaves and slightly fuzzy stems. (The second photo below shows a fully developed 'potato' style tomato leaf.) 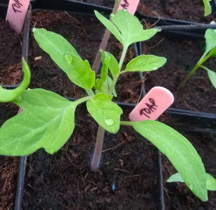 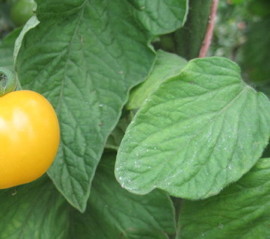 Onions (Allium cepa) come up 'folded' then straighten up once they're through the soil surface. At a first glance they can look like grass seedlings, but they're much more rounded (and smell of onion if you rub them!):

From left to right below Poached egg plants then Clary Sage then Snapdragons. 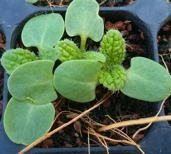 Herbs - Basil then Korean mint then Fennel (herb and bulb/florence fennel both look the same at the seedling stage).

Huauzontle (Chenopodium berlandierii) and Quinoa (Chenopodium quinoa) seedlings look pretty much identical (though if you're thinking of saving seed, don't worry, they're different species and won't cross). They also look remarkably similar to seedlings of the weed Fat Hen when they get their first set of true leaves, so it's worth starting them off in a tray or modules if that's an issue for you. The photo below shows Huauzontle seedlings just germinated:

Leaf mallow (Malva crispa) seedlings are quite unusual and a pretty heart shape - they can take a little while to come up, so keep an eye out for them. (They often do best with varying day / night temperatures, so if you want to start them in trays rather than direct, they're better on a greenhouse bench for example rather than in a propagator.)

Magentaspreen (Chenopodium giganteum) seedling on the left below, and Orach seedling (Atriplex hortensis) on the right