This has been very interesting and I have learnt a lot along the way. Back in 1998 I read that you did get 'a small level of compatibility' between different squash species.

Wondering at the time just what that meant, I went out into the squash patch and started making crosses every which way. (Actually, lots of other people have thought of this before and it had been well worked out - see the book 'Cucurbits' in our reference section - but to me, at the time, it was all rather fun & new.)

What I found is the case, is that usually you can pollinate one species with another species and fruit will set quite happily. The problem is that the seeds often aren't formed or aren't viable. Or in fact as I found out, the first generation grows fine, but is such a genetic mish-mash that the resulting plant can't make any seeds at all. It's the squash equivalent of a mule, so to speak.

The interesting thing was that a very few seeds sometimes are formed in later generations, due to the plant getting rid of the extra chromosomes (or perhaps doubling up the spares) and achieving some sort of stability.

Now there is some sort of rationale to this. Many good new combinations of genes come from trans-species crosses. For example, Waltham Butternut actually was bred partially from another species altogether. So while I was just playing around, I know that it was possible to get useful plants out the end if one is lucky. 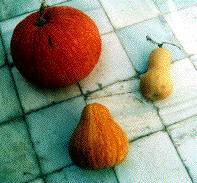 The parent types are at the top. Hokkaido is at the top left, the Waltham Butternut at the top right.

I pollinated the Hokkaido with the Waltham. They obviously aren't very compatible - after all they are two different species - and only 3 seed were formed. These were the F1 seed.

When planted, only 2 of these grew, making F1 plants that grew fruit shown at the bottom of the photo.

(2)Backcrossing the F1 to one of the parents

I pollinated one of these F1 plants with Hokkaido pollen, because they were such a genetic mix - from two different species - that I knew that to get any chance at all of getting stable lines from these, I needed to use one of the parents (or something very similar).

This gave me F1-BC1 seed, that is to say, the F1 backcrossed to the parent. And again only a few seeds were formed.

When grown, these F1-BC1 plants made fruit a bit more like the Hokkaido as shown here. This was fair enough as they were, genetically speaking, three-quarters Hokkaido and only 1-quarter Waltham. And they had a nice nutty resinous flavour, like a Gem-Rolet type of squash.

(3) Crossing with another squash.

I had planned to self-pollinate these to get a stable line. But I hit a snag: they were male-sterile - they didn't make any pollen. This is quite common in wide crosses - the genetic material from the two parents is so dissimilar that it can't pair together properly in the pollen-formation process.

Keen to carry on with the experiment, I cast around for some pollen. What was in flower? Lots of other squash, but nothing I tried seemed to work. Finally some pollen from a Baby Blue Hubbard did set a fruit (above) and a few seeds were formed.

These seed were [(Waltham x Hokkaido)x Hokkaido] x Baby Blue Hubbard and could be called F1-BC1-F1 seed although there isn't really a standard notation for this sort of silliness. These seeds were given a number 22195 and have been stored.

(4) Other lines from the same cross

The sequence above wasn't the only one I did. I now have seed that is:

What did I learn from all this?

Well, firstly, you do get a few viable seeds formed every time even between different species. The F1 was reasonably normal as it had one copy of everything from each parent, so all parts of the plant cells 'worked' reasonably well.

But further generations were very odd, due to genetic incompatibilities between the parent genomes. Anything beyond an F1 has all sorts of different possible mixes of genetic material - some will have both copies from one parent, some both from the other, some a mix, and some hopelessly tangled and damaged. So I realised that it was a great way of introducing a LOT of variation - but that to get something stable out the end would consequently be a lot of work.

Allard puts it very well in his book when he says that no cross should be done without a clearly-defined aim - you should know the end point you want, and have a plan of how to get there. Crosses, even wide crosses, are just too easy to do. The work is not in the crossing, it is in evaluating the hundreds of F2 seeds you need to grow in order to spot that one 'perfect' plant.

With this in mind, I felt that I didn't want to spend so much time playing with my trans-species crosses, though I do grow a few out from year to year just for fun. Instead I started the much more specific Yellow Cousa Courgette Project.

I did actually keep on with my cross evaluations after writing the above . . . and most lines did stabilise out a bit more after a while. Unfortunately most stabilised out into something not very productive or appetising.

However, there was one exception. One line produced huge squash right from the start, was moderately fertile, and kept well. It also tasted nice and atracted a lot of comments ("What the ***** is that growing over there?")

This was the Winter Monster squash.

We have carried on with the Winter Monster, growing each year and selecting for biggest plants and fruit. It has really good squash. It is still variable for shape and colour, but taste is great for all of them. We think it probably is a new species all unto itself, due to chromosome damage during the intial crossings.

We hope to release a few packets for people to play with next spring.