~ Some other INTERESTING and TASTY THINGS ~
from the CUCUMBER FAMILY

Melothrie (aka Cucamelon)
We are pleased to be able to offer another unusual cucumber relative given to us many years ago by Bruno Ansker from France. It's a rampant scrambling vine covered in hundreds of little green & white fruit about an inch long. Very, very easy to grow and great fun.

Here you can see them growing up a bit of netting in the polytunnel of our seed grower, Melissa Holloway. They are fairly unfussy - can get to about 7 or even 8 ft high in a good summer, but they'll also grow over lower netting if that's all you have.

These little fruit taste just like a cucumber and have a nice fresh crunchy texture. They're great for pickles, stirfry, & they look really good whole in salads. Everyone who tries them thinks they're great!

We like to put out a bowl of them (whole) for nibbles at parties, or try them halved as the perfect garnish for a G&T.

Grow outdoors in a sunny spot, or will really take off under cover .

Note: This is one of these plants that still need their scientific classification sorted out. Some people say it should be called Melothria scabra, others think it is better called Apodanthera pringlei. Actually, the whole classification of this branch of the cucurbits is a bit vague - and one day no doubt some specialist somewhere (with more time than us!) will get enthusiastic enough to grow them all next to each other and sort it all out.

We like searching for interesting things to grow that are good to eat too. Achocha is one of these - an unusual vegetable from South America that is remarkably easy to grow. It is impressively productive, loves our variable UK summers, and can be used raw in salads when small a bit like a cucumber.

We have tried out lots of different achocha from seedbanks and private collections, and after much consideration, offer three varieties that we really love. "Fat Baby" is very early, and the easiest to grow outdoors. Giant Bolivian is a new addition, and has to be one of our favourite new finds in the last few years. The exploding cucumber is just for fun, but it tastes great too.

Fat Baby is remarkably easy to grow, and can be used raw in salads when small a bit like a cucumber.

It is a quick and vigorous climber and you can climb it up and over anything, including garden sheds, although it does need a sunny open spot. Definitely best outdoors though and not in a polytunnel, because it tends to take over if grown inside.

The best thing however, is that the mature fruit taste very much like green peppers when fried - yet they can be grown outdoors with ease and set masses of fruit with no effort.

To cook, simply cut open and flick out the seeds (saving a few for future planting of course) and then slice and fry just as a green pepper. Very similar taste to green peppers, just much easier to grow! Here they are on a very popular pizza Kate made for a dinner party (the tomato sauce is of course yellow - using Plum Lemon Tomato - just for fun, the achochas are the green bits.)

For the pedantic, or botanically curious among you, the Latin name of this is said by many to be Cyclanthera pedata, but we are beginning to suspect it is actually Cyclanthera brachyastacha, as we think this is in fact a domesticated version of the Exploding Cucumber below. Not that it's terribly important, mind you. 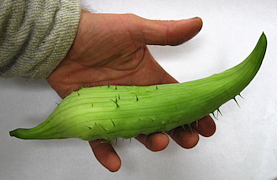 Giant Bolivian Achocha
We first read about Achocha in the wonderful book Lost Crops of the Incas many years ago.

In that book there was description of a huge Achocha, but although we grew many varieties over the years, we never found a really big one like it - until Ben tracked down seven seeds from a collector in Bolivia. The plants grow huge fruit about 5 -6 inches long.

They are tasty both raw and cooked - very like sweet green peppers. And the huge vines yield lots of fruit. Amazing! Fried, or stuffed and roasted, it makes a great dinner.

We want as many people as possible to get a chance to grow this plant (we think its really great!). We are putting 5 seed in each packet, with the backup assurance that if you do not get at least 2 big plants we will refund or replace! 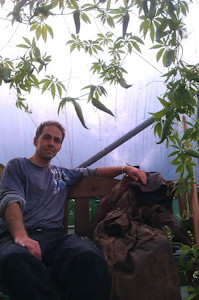 Ben chilling out in the tunnel with his Achocha . . .

The Fat Baby have always been a great hit both with us and everyone who has tried them. So we were intrigued to find that they have a close relative known as the Exploding Cucumber, whose Latin name is - quite aptly - "Cyclanthera explodens".

Anyways, these grow similarly to the Achocha - a tendrilly climbing vine . The fruit are similar, except having an even weirder shape, and when mature, they burst open at the slightest touch, flinging their seeds out across the garden!

Eating use is the same as Achocha; the fruit can be used small (1/2 inch) in salads or mature (1 inch, exploded) cooked. No need to deseed them first as they do this for you at the slightest provocation! They are of course also an excellent thing to enter in your local horticultural show for the 'unusually shaped vegetable' category. 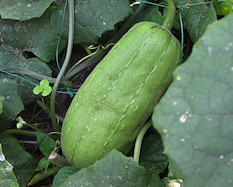 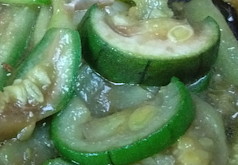 Smooth or Round Loofa
A climbing vegetable from Egypt, Vietnam and China, also spelt Luffa. It makes cylindrical fruit that are picked young and green (under 6 inches) and used fried, curried or boiled ( like a courgette), and has beautiful yellow flowers.

Grow up netting in a polytunnel or greenhouse only (it needs a long warm summer).

Delicious small, inedibly fibrous when large, but then can be used as a pot scourer - check your invoice sheet for instructions.